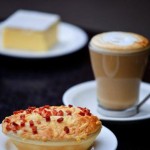 Rob & Sharon have enjoyed  Waack’s Bakery since 2016, operating as a family run and locally operated enterprise.  We enjoy giving young people a opportunity to acquire new skills, learn and build a career in the baking & hospitality industry.

Chris Waack  (1995) read a one line advertisement in the Weekly Times which read “Bakery for sale suit family”. Chris had a young family and wanted a bakery so it seemed to fit. Many years later it has grown into the magnificent family owned local bakery which is Waack’s Bakery. Waack’s Bakery has built a reputation on quality products, exceptional service and having a bit of fun on the way.

In 1999 they expanded into Ararat establishing an icon bakery in the middle of the main street. The bakery originally small is now 3 shops wide and seats over 100 people. The bakery is a wonderful spot to grab a bite to eat with focaccias, vol-au-vents, lasagna and who could forget the Chicken and Leek Pies, Lamb Shank in Red Wine Pies or one of our silver medal steak pies.

Then in 2006 we took the opportunity to expand into Horsham by purchasing a small bakery on the corner of Firebrace St and Roberts Place. This bakery provides a spot for shoppers and local workers to enjoy a lovely cup of coffee or a bite of lunch.

Waack’s Bakery is built on quality and service, so it is important Waack’s maintains and exceeds these standards at all times. Waack’s bakery pride themselves on being involved in local communities.

In 2004 Waack’s Bakery was a major organiser of the 59th Jazz Conversion in Stawell.
Waack’s bakery is a long term sponsor of the Stawell gift and in 2010 and 2011 stepped their support up to sponsor a final at the Gift.
At Waack’s we currently run 3 retail outlets with a major production facility in Stawell. We employ approximately 50 staff from shop staff to bakers to delivery drivers and office staff. We have a focus on employing and training young people so they go on to become valuable members of our communities in the future.

Waack’s bake a large range of fresh products each day with a focus on producing innovative quality products. They have developed a large range of of wow products including Lamb Shank In Red Wine, Cream Mocha Rings and of course who could forget Australia’s Best Vanilla Slice. All product are made with the freshest ingredients and our recipes have been developed over years of trial.

To create great tasting product each and every time, to provide a friendly & warm service. To employ local people who take pride in our product and flourish in our Bakery.